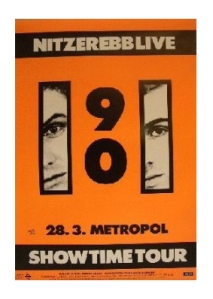 25 years ago, my mom took my sister and me to see our synth-pop heroes Depeche Mode live on their World Violation tour.

Sure, the Mode was ascending toward its peak of success and played soon-to-be classics, tried-and-true hits and the requisite Martin Gore interlude. There were the Dave Gahan hip gyrations and the stark Anton Corbijn visuals. But it wasn’t Dave and Martin and Alan and Fletch—and their sweet, sultry electro tunes—that captured my imagination that night. No, that task was left to opener Nitzer Ebb.

Here were three guys filling up a massive arena stage with driving, monotonous beats and outsized attitude; no easy feat, especially for an opener before a typically indifferent arena crowd. Over a rhythmic din knocked out by two robotic drummers busting out their best Sprockets impressions stormed vocalist Douglas McCarthy.

Part rabid preacher, part motivational speaker, he seethed with visceral angst. Back and forth across the stage he went, chanting, grunting, and barking snippets of text. Mostly verbs. Some nouns. Muscle. Hate. That sort of thing. There was smoke, there was sweat, there were spandex shorts. But above all there was a sense of purpose. Pure emotion expressed via the most economical means: voice, beats, synth.

While DM dealt in smooth, catchy—albeit dark—electronics, this was something different. Mechanical, menacing and slightly sexy. They had a cool, German sounding name and dealt in hard-edged Soviet/Constructivist imagery. It was Depeche taken to the next level. Or maybe it was a portrait of Depeche further down on the evolutionary chart. Either way, my impressionable, seventh-grade mind was blown.

For me, this was a eureka moment, one where you realize that the gift offered up to you was exactly what you’d been looking for. Ebb was a gateway drug, setting me on a mission to explore the more aggressive side of dance music. Front 242, Front Line Assembly, Skinny Puppy, Ministry, and a cadre of German, Belgian, and North American bands were soon to follow.

I remember having to leave before the encore on that school night. No matter, the die was cast and the rest is history. It helped, too, that six years later I’d meet a girl who was into both bands just as much as me.

(Here’s a great example of what we saw, taken from a performance at Frankfurt’s legendary TechnoClub.)